Coefficient of a Term

Polynomials in One Variable

Polynomial in Two or More Variables

Degree of a Polynomial

It is branch of mathematics in which we use literal numbers and statements symbolically. Literal numbers can be positive or negative, they are variables.

In algebra, we use two types of symbols, that is constants and variables.

A symbol (letter) which can be given various numerical values is known as variable. As variables are usually denoted by letters, so it is also known as literal / literal numbers. Let's have a look at some examples.

Hence a combination of constant and variable is also a variable.

A collection of constants and literals (variables) connected by one or more arithmetic operations is called an algebraic expression. Let's see some examples.


Coefficient of a Term

Any factor of a term of an algebraic expression is called coefficient of the remaining factor of the term. Let's see some examples.

In the term 5abc,

Coefficient of a = 5bc

Polynomials in One Variable

Polynomial in Two or More Variables

An algebraic expression having two or more variables called polynomial in those variables. Powers are here non negative integer.

A polynomial of degree 1 is known as linear polynomial.

Degree of a Polynomial

The degree of each term in a polynomial is the sum of the exponents of variables of the term and the degree of the polynomials is the greatest of the degrees of its terms. Let's see some examples.

Example 1. Find out the degree in the given polynomial
3 + 4p

Add all underlined liked terms in each group and get final result.

In this method we write each expression to be added in separate row in such way that like term should come below other and add them. Let's see one example to understand it better. 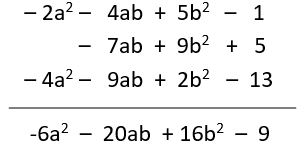 Rules for multiplication of two or more algebraic expressions are given below.

Multiplication of two or more monomials

Multiplication of a polynomial by a monomial

In this operation, each term of polynomial is multiplied by monomial by using distributive law.

Solution. In this case, first we arrange the term of given polynomials in descending power of x and then multiplying, we get product.

From law of exponent, we know that if p is a variable and m and n are positive integers, then pm ÷ pn = pm-n. This law should use during doing division of algebraic expression.

Division of a polynomial by a monomial

Here, each term of polynomial divide by monomial gets the quotient.

Following rules should be followed while doing division of polynomial by polynomial.

a) The terms of dividend and divisor must be arranged in descending order to their degrees.

c) Then all terms of divisor multiplied by the first term of quotient and product terms should write below the corresponding term of dividend.

d) Then work out subtraction and get remainder.

e) Then we write down the remaining term of dividend next to the remainder and it becomes new dividend and then repeat the process of division that did above till we get zero or a polynomial of degree less than that of divisor. 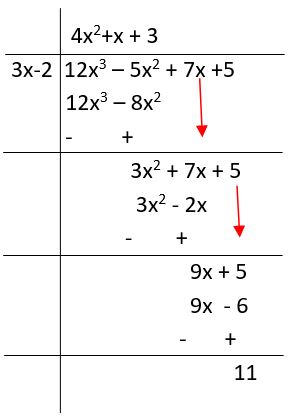 But, when equation equality is true for all value of variable, then this type of equation called identities. Let's see some examples.

Example 2. y + 3y = 4y, the equality of this equation is true for all value of variable. So, it is called an identity.

An identity is an equality which is true for all values of the variable. Identities implies that the expressions on either side of the equality sign are identical.

There are mainly three identities are very useful for factorisation and simplification of algebraic expression.