Perimeter of a Triangle

Exterior Angles of a Triangle

Sum of Lengths of Two Sides of a Triangle

Triangles are named on the basis of the lengths of their sides and the measures of their angles. Different types of triangles are given below. 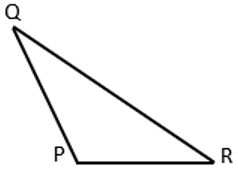 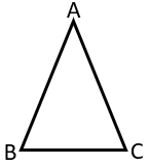 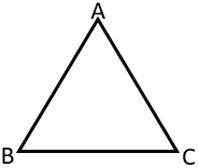 A triangle whose all the angles are acute is known as acute angled triangle or acute triangle. 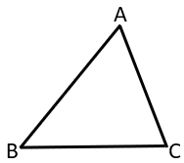 A triangle whose one angle is a right angle is known as a right-angled triangle. 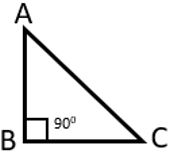 Triangle ABC is a right-angled triangle, where ∠ABC = 90°

A triangle whose one angle is more than 90° is known as obtuse-angled triangle.

Perimeter of a Triangle

Let's see some examples to understand these properties.

Example 2. Find all the angles of right-angled isosceles triangle.

Example 3. If the angles of a triangle are in the ratio 2 : 3 : 4, then find the three angles of the triangle.

Example 4. The sum of two angles of an isosceles triangle is equal to it's third angle. Determine the measures of all the angles.

Solution. Let's assume PQR is the triangle and ∠P, ∠Q, and ∠R it's angles.

As it is a right-angled isosceles triangle, it's ∠P = ∠Q

Example 5. One of the acute angles of a right-angled triangle is 50°. Find the other acute angle.

Solution. Let's assume the other acute angle is p°. 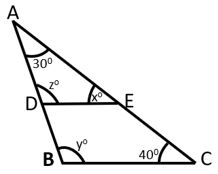 Here, DE || BC and transversal AB intersect them at point B and D. So corresponding angles will be equal.

Similarly, transversal AC intersect them at point E and C. So corresponding angles will be equal.

Exterior Angles of a Triangle 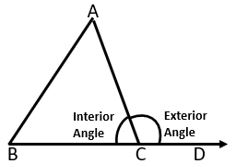 Example 1. Find the value of 'x' in the below given figure. 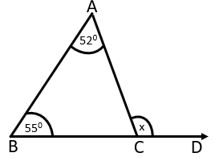 Solution. As we know, exterior angle of a triangle is equal to its two interior opposite angles.

Example 2. Find the measures of ∠ABC and ∠BAC in the below given figure.

Solution. Exterior angle of a triangle is equal to its two interior opposite angles.

Example 3. Find the value of 'p' and 'q' in the below given figure. 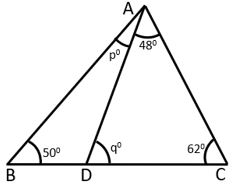 Solution. From the above figure we can see two triangles ABC and ADC.

Sum of Lengths of Two Sides of a Triangle

Sum of length of any two sides of a triangle is greater than the length of its third side. This rule is applicable for any kind of triangle.

Let's see some examples to understand it better.

Example 1. Is it possible to have a triangle with the following sides?

Hence, it is proved that sum of lengths of any two sides is greater than the length of third side. Therefore, the triangle is possible.

Example 2. Is it possible to have a triangle with the following sides?

Here, sum of lengths of any two sides is less than the third sides. So triangle formation can not be possible.

In a right-angled triangle, the square of the hypotenuse equals to the sum of the squares of its remaining two sides. 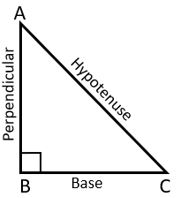 Example 1. The hypotenuse of a right-angled triangle is 15 cm long and length of the base is 5 cm. Find the height of the triangle.

Solution. Let's assume ABC is a right-angled triangle as shown in the below figure.

According to Pythagoras theorem AB2 + BC2 = AC2

Hence, height of the triangle is 12 cm.

Example 2. Find the value of 'x' in the below given figure.

Example 3. A 25 m long ladder riches a roof of 20 m high from the ground on placing it against the wall. How far is the foot of the ladder from the wall?

Solution. Let's assume AB is the ladder, B is the roof and CB is the height of the wall and AC is the distance between wall and ladder.

Hence, the ladder is 15 m away from the wall.