A point is a mark of position, it has neither length nor breadth nor depth. We denote a point by a capital letter A, B, C, D, etc. as shown in the below figure.

Let us consider two points P and Q as shown in the below figure. The straight path from P to Q is known as line segment PQ.

Two line segments AB and CD are said to be congruent, if their lengths are equal and we write, AB = CD.

Read the mark on the ruler against the point Q. In this case Q is on 9 cm. So, the length of PQ is 9 cm.

A line segment extended endlessly on both sides is known as Line. Picture below shows a example of line.

A line has no end points and it does not have a definite length. Sometimes, we denote a line by a small letter p, q , r, etc.

Let's draw a ray with initial point 'O' and passing through a given point 'P'.

A ray has no definite length.

Two rays having same initial point and extending indefinitely in opposite directions are known as opposite rays.

If there is a point 'x' common to two lines 'p' and 'q' in the same plane, we can say that the two lines are intersecting at point 'x'. This point x is known as point of intersection. 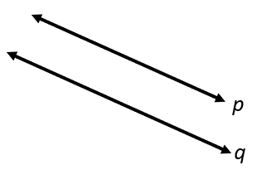 Three or more lines are said to be concurrent lines if all the lines pass through the same point. The common point is known as point of concurrence of the given lines. 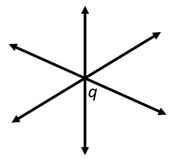 Three or more points in a plane are called Collinear points if and only if all of them lie on the same line.

There are various types of quadrilaterals.

A quadrilateral having equal opposite sides and all four angles are 90° then it is known as a rectangle.

In the above rectangle AB = CD and BC = AD

Add opposite vertices with lines AC and BD as shown in below figure. Both AC and BD are known as diagonals.

A rectangle can have maximum two diagonals.
AC = BD

A quadrilateral having all sides and angles(90°) are equal is known as square.

Add opposite vertices with lines AC and BD as shown in below figure. Both AC and BD are known as diagonals.

A square can have maximum two diagonals.

A quadrilateral having below mentioned properties are known as parallelogram. 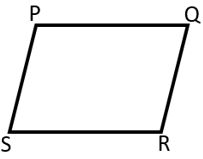 A parallelogram having all sides equal is known as rhombus. 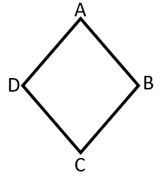 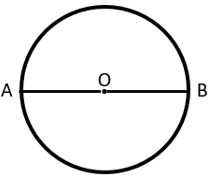