When two rays start from the same point as shown in the below figure is known as an angle.

The common initial point 'O' is known as vertex. OA and OB are called sides of the angle. The symbol used to denote an angle is '∠'. So, we can name the above angle as ∠AOB or ∠BOA. There are various types of angles, they are mentioned below.

An angle which is more than 0° and less than 90° is known as acute angle.

An angle whose measure is 90° is known as right angle.

An angle which is equal to 180° is known as straight angle.

An angle whose measure lies between 180° and less than 360° is known as reflex angle.

An angle which is equal to 0° is known as zero angle.

Here ∠AOB is a zero angle.

An angle whose measure is 360° is known as complete angle.

Here ∠AOB is a complete angle.

Protractor is a semi circular instrument by which we can measure angles. The mid point of its horizontal edge is known as central point. The stright angle at the central point is divided into 180 equal divisions, each measuring 1°. As we can see a protractor has two scales. The inner scale is anticlockwise bigins with 0° on the right and run upto 180° on the left. The outer clockwise scale begins 0° on the left and runs up to 180° on the right. 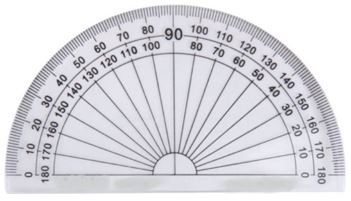 Let's find out the measurement of below given angle ∠AOB.

Now place the protractor in such a way that it's centre is exactly on the vertex 'O' and base line lies on the side OB of the angle as shown in the below figure. 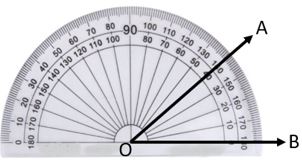 Read off the mark through which the side OA passes starting from 0° on the right. We can see OA passes through 40° mark.
So, ∠AOB = 40°

Let's find out the measurment of below given angle ∠ZYZ. 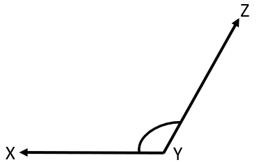 Now place the protractor in such a way that it's centre is exactly on the vertex 'Y' and base line lies on the side XY of the angle as shown in the below figure. 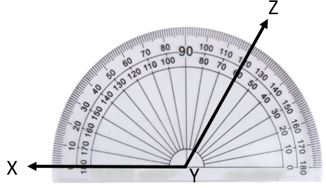 Two angles having the same measure are known as congruent angles. In the below given figures both ∠PQR and ∠XYZ having 30°.